The rumour mill of the much anticipated soccer city in Pakistan ends as year 2022 kicks off with an iconic landmark stadium deal being inked between GSV and NED University.  The state of the art stadium is influenced and designed by German engineering to develop a series of football infrastructure projects in Pakistan by GSV from the city of lights in Karachi.

Karachi city will see an iconic landmark with a brand new sports arena landscape in its skyline with an investment of $12 million USD.  It will not only offer FIFA international playing conditions but will also offer an enduring football experience for fans and players with a raft of marketing and technology opportunities for brands never offered before in Pakistan’s sports. 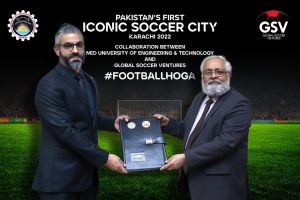 The soccer city is based in the heartbeat of youth emulating the success of college football development model in the USA.  GSV’s philosophy is to identify and develop players at the right age whilst continuing their education being identified as a priority for Pakistani parents and thereby offering alternative careers as a hotbed of talent in football on and off the pitch.

Dr. Sarosh Hashmat Lodhi, Vice Chancellor, NED University of Engineering and Technology said: “NED is world renowned for being at the cutting edge of technology and science in its educational curriculum so why not football. It is a vision that only GSV can bring to life.  I have seen the science and evolution of football on offer and it will be a major transformation for football in Pakistan”.

Chairman GSV Yasir Mahmood said: “It is time Pakistan rediscovers itself in football infrastructure offering the much needed professional and world class facilities.  This flagship soccer city at NED will entice other cities or institutes to come forward and become part of GSV’s football legacy offering the best in technology, science and football training all under one roof”.

Michael Owen said: “There is nothing more important than having home and away fans in football stadiums.  This investment will not only ignite inter-city football rivalry but will also become the future of football development all over Pakistan with sports science at the forefront offering international opportunities”.

Zabe Khan, CEO of GSV said: “We are the foundation of a sports revolution in Pakistan with soccer city being our flagship show-stopper.  The ideology here is that we don’t want to tell people of our dreams we want to show them, so we build it, fans come and get fanatical about our players in Pakistan’s very own theatre of dreams to display their talent”.

A detailed press announcement and reveal of Pakistan’s first ever soccer city is to be made by end of January 2022 by Michael Owen and a star studded celebrity line up with the very first images and 3D virtual video of the stadium being unveiled as a new year’s gift to Pakistan – so stay tuned to GSV.

Talks between Pakistan and IMF begin in Qatar

Dollar jumps to Rs197 in interbank market; trading at Rs200 in open market

by News Desk
No Result
View All Result