On Monday, the Inter-Services Public Relations (ISPR) issued an official statement in which they stated that Pakistan Army was aghast at the uncalled for and defamatory statement by Pakistan Tehreek-i-Insaf Chairman Imran Khan.

The statement by ISPR came after Khan called out the coalition government that they were trying to appoint the chief of the army staff of their choice so they could be saved in corruption cases. He went on to state that If a patriotic army chief was appointed, the government would have to explain the looted money.

Khan said that appointment of the army chief should be done on merit. 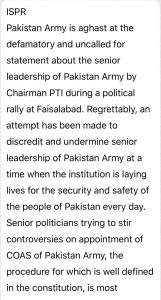 After facing a direct attack, the ISPR responded with an official statement. Army added that the remarks were an attempt to discredit and undermine the efforts of the army during a time when they were sacrificing their lives for the country. ISPR further said that politicising the appointment of army chief would benefit no one.

Alleged rape and murder of minor girl reported in Korangi

Popular actor in the Pakistani entertainment industry, Azfar Rehman, has announced not to participate in the Hum Awards 2022 as...

Alleged rape and murder of minor girl reported in Korangi

An alleged rape and murder case was reported in Zaman Town, Korangi, of a 12-year-old girl. According to police, the...

Envoy of International humanitarian & UNHRC, Angelina Jolie, visited the National Flood Response and Coordination Centre during her arrival in...