On Friday, the lead vocalist of the Noori band, Ali Noor, was accused by a journalist of sexual harassment. Since then, Ali has been moving to and fro on his stance on the allegations.

A journalist, Ayesha Bint-e-Rashid, had posted a screenshot of WhatsApp chat with Ali. She accused him of sexual misconduct as she believed that the singer emotionally manipulated and took advantage of her.

On Saturday, replying to the allegations, Ali posted an Instagram story where he apologised for the actions and asked Ayesha to forgive him. He said that he did not mean any harm to Ayesha. 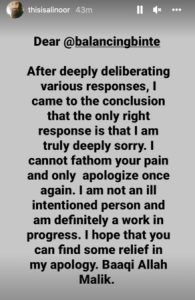 However, on Sunday, Ali lashed out at Ayesha and denied accepting any sort of sexual harassment allegations. The story read that he no longer cared about Ayesha and had gathered the courage to move towards the next life. He used the hashtag #stopmockeryofmetoo, insinuating that the journalist in question had done so for attention. 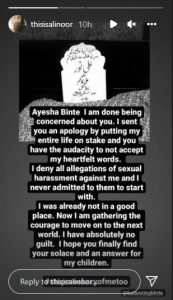 In his second Insta story, Ali called out the people who loved him and explained that he was not a sexual abuser. 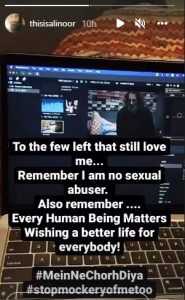 Talks between Pakistan and IMF begin in Qatar

by Web Desk
No Result
View All Result