Huge setback to Q-commerce in Pakistan; Airlift shuts down due to global recession

The tech startup ecosystem in Pakistan woke up to an extremely disappointing news. One of the most celebrated and noteworthy q-commerce startups, Airlift, has decided to end its operation in the country. The announcement has left the entrepreneurship fraternity in shock.

According to a press release by Airlift, the company handled the financial situation during Covid-19, but the global recession and downturn in the capital market had a severe impact on the company. The ride-haling and grocery delivery startup thanked the team, vendors, partners, and suppliers for their cooperation.

Thousands of young and competent employees of Airlift have become jobless. All ex-employees have bombarded LinkedIn with posts asking for jobs. Some employees were the sole breadwinners of their families. 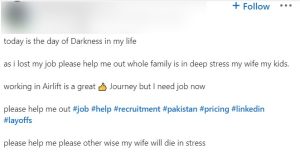 The shutdown has put a question mark on several tech startups, whether they would survive or if a new wave of unemployment will take over Pakistan.